Extermination: Will This Bad Ass Game Ever Return To The PS Platform?

Extermination was just a crazy, crazy, CRAZY Game, I’m surprised that Hollywood didn’t try to snatch this up and ruin it like so many other video game to Silver Screen movie disasters (Well X-Men was 50% right and Resident Evil was 45% so I guess their movie magic ideals didn’t total flop haha).

This story takes place on Dec 24, 2005. And the protagonist (hero) of the game is U.S. Marines Special Forces Sergeant Dennis Riley and he is part of a squad called “The Red Light Team.”

His Marine Squad gets a desperate S.O.S call from Fort Stewart (Which Is A Hush Hush Secret American Research Facility In Antarctica, and the nature of the distress call is to inform them of a air strike that is targeted on the base that they are flying to by chance of luck.

Team Red is then sent to check out the facility to see what the problem is, but first they have a problem right off as their plane suddenly malfunctions  and the have to bail out of it.

The team is then separated due to the C-17’s demise, so the last order by the Major is for everybody to regroup at Facility Building B and that’s where the crazy starts…

Dennis then is paired up with teammate Roger Grigman, as they look for a way into the facility they spot a ventilation shaft. They enter the shaft and slide down into the facility only to see that it seems abandoned, and the looks of war is left behind of a “battle.”

The first thing they try to do is lower the drawbridge that is halfway raised up, they need to lower it to get to Building B to meet the rest of the team. 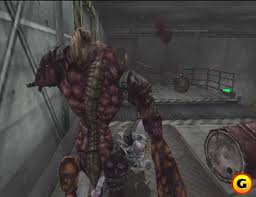 But the crazy thing happens, Roger is jumped on by these over sized tadpole looking things called “Hydras,” they start to infect him greatly causing him to rapidly change into something else just seconds in front of Riley’s own two eyes.

Then this girl in a biohazard suit comes dashing out on a high above catwalk and blasts Roger to death with an Assualt Rifle Gun. She then throws Dennis a clip from her gun to him and a vile tube of “MTS vaccine,” and says to Riley from a distance hidden behind a wall, “Use it if you don’t want to end up like your friend!”

From there Riley meets his nightmares of a life time as he tries to pursue the girl further as she runs off, Riley manages to get across the lowered drawbridge only to get caught up in a crucial lockdown race against time after the girl pulled the lock-down trigger lever to the facility.

He reaches the girl in the biosuit, but she is in a safe control room that is locked out she sees him and writes numbers on the dusted window on the door for  him to see.

The whole situation of the story here is that the Government was using the Marines as Guinea Pigs or rather “Test Subjects,” with the super bacteria strain called “HO213”.

Riley learns of this whole cover up, and as his teammates are taken out by it one way or another (Only Him The Girl In The Suit Who Later Is Known To Him As Cindy, And One Other Teammate Gary Survive The Whole Ordeal).

The creatures in this game are grotesque, most of them insane fast-moving and they use to be former members of the team now mutated into monsters.

And unlike John Carpenters’ “The Thing” it is not just the individuals that are affected but the very environment that Riley or anybody else is walking or running on, gives off a mushy type sound this is what used to be the ground or a partial covered wall of some type of membrane on it with a bad smell to boot LOL.

Another girl named Sonia gets engulfed into the wall by the Ho213 bacteria (pictured right) at some point, dogs that where there even get infected and they become “Watch Dogs,” and are quick and very deadly.

Even the water was dangerous, I played this game long time ago before and came across a part where I was just standing in the water while shooting at something right and it just pushed me off of it ROTFLAMO. I was like WHAT THE H**L was that about…

And the bosses are ridiculous hard to battle against as well. That’s why I’m surprised that Hollywood didn’t try to Movie Make this one, but I know it would take heap loads of money to do so.

Here’s a Few Videos For Extermination (Video Credit: Spinnygrass) Dude hesistates in gameplay a little to much he must be scared haha.

Extermination: Will This Bad Ass Game Ever Return To The PS Platform?

Till Then My Motto: Stay calm, cool, collective knowing that the only thing that keeps you from making a difference in life is yourself strive for the best!