LOL I read this story about Tracy Mabb that was walking out into the intersection on South Dixie Highway out in Pompano Beach, and out of the blue the woman starts to go into strip tease mode, right out in public. And this girl didn’t have any shame about it LOL, as she started to undress herself as she went in an order type fashion.

This girl first started taking off her top and exposing her boobs then she got stupid from there and gave a pornographic type play with herself in front of motorists, as she proceeded walking steadily into traffic. (Ron Jeremy Probably Would Have Pulled The Car Over And Grabbed This Chick For A Video Shoot Pretty Sure If He Saw Her Haha). After some time she started gathering up quite an audience, as they were trying to figure out was the chick insane or high etc..

When the police arrived on the scene, they tried to convince the woman to put on some clothes, but she just kept telling them “I Don’t Give A Fuck!”

Ok she does know that is NOT a good choice of words to put out there while her being naked stripped right, I mean could you image if this girl tried something like that in front of a lock-down max security prison and she just wonders out and guards say aloud over the P.A. Speakers, “Yea There’s A Naked Chick Walking Outside In Front Of The Facility,” LOL Prison Break right there haha.

And this story gets off the track even more, as to the prior week another chick Ashley Holton, 35, 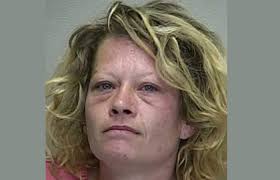 did the same thing like this girl did LOL DAM, WTF is up with Florida all of a sudden.

Then also you have to look back on the crazy guy that just viral in a half on a homeless guy, as he crawls  over the guy naked and starts biting off his face like its Brittle Candy” or something. Oh man, (I gotta shake the cobwebs out of my head on that one…). After that situation happened with the homeless guy attack, people out in florida started referring to all this as some sort of “Zombie Apocalypse,” or some crazy stuff that you probably would actually see if you played that one game “Left 4 Dead.”

But in the case of Tracy Mabb, the cops figured that the girl was on something clearly LOL, whatever it was though I don’t even think LSD got S**t on that haha.