Will Ferrell has done some outrageous character skits before, but this one LOL is out of the box type thinking all together. So Ferrell is playing the role of a Father with three kids, who just so happens to live in L.A. who owns a business.

And his purpose of appearing on a YouTube channel is to gather support of the city to rally up the backing support for Eric Garcetti who is running for mayor this year of Los Angeles.

The thing of this whole idea jumped off Wednesday, when Ferrell decided to toss his hat into the ring and jump in for the “Political Swim” and it has to make you think for a minute is this guy Garcetti might be a long time friend of Ferrell’s or what?

No one knows that answer for sure, you have to ask either Garcetti or Ferrell about that one.

But Ferrell shot a video about the Eric Garcetti endorsement, LOL with the song “Let’s Get Physical” which was a hit song done by Olivia Newton-John. And in his role as the Father of 3 kids and 4 illegitimate kids, he hopes to have Garcetti voted in as mayor of Los Angeles as he sees the city as an “Ideal Place” to raise his kids.

And the even weirder thing to all this is a catch for the backing part of Garcetti for mayor, he vows to basically “Buy” free waffles for every citizen of Los Angeles if, they show support for Garcetti casting a vote to him for his position as Mayor.

LOL it has to make you laugh uncontrollably in a way, Ferrell is a great actor same time he is nuts haha. 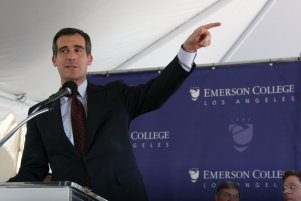 But it is a great ideal if Garcetti is using this as an angle to gather the backing from L.A. citizens, as he contends to run for Mayor in 13′. Now another weird funny thing that Ferrell is being noted for… Is him playing the role of a security guard at the Staples Center ejecting Shaquille O’ Neal from a staged basketball game.

This was some of the “Super Bowl” ads that ran for the football event, and his role as a security guard comes into play along with the commercial ad-based concept.

Click the link below to check out more about Ferrell’s support for Garcetti..

Ten years ago 7-year-old Samantha Reckis given Children’s Motrin which was administered to her by her family. But they didn’t know the side effects that the medicine would have on their child at the time, but shortly after taking the medicine, Samantha started to have violent reactions to the medicine.

Now Children’s Motrin is a pain reliever given to a kid when they are coming down with a fever, and Reckis was given the medicine over the course of a few days. Then that’s where she started to develop blisters on her skin, and she complained about being extremely tired (Fatigue).

And as she was continually given the one-time popular children’s medicine, her condition worsened even further. After being taken to see a Doctor, she was diagnosed with a rare action to the medicine (Toxic Epidermal Necrolysis) as a result from taken the medication.

Results from taking the medicine left Reckis (Now 17) legally blind, and limited mobility (She Can Walk Only A Short Distance Before Becoming Extremely Exhausted). Also she suffers from a burning irritations effecting the skin, almost like having the skin burned off… Which was said by the family’s attorney that represents them in their case.

Johnson & Johnson and the makers of the medicine McNeil Consumer & Speciality Pharmaceuticals, did not provide proper provisions and possible side-effect that the medicine might cause if taken.

The court has awarded Reckis $50 million and her parents 6.5 million each. A trial Judge must still rule the decision final after a review of the case..

Which has been the focus of under-paid workers in an increasing tax zone of society itself, President Obama made a proposal to boost the minimal wage amount up to $1.75. It was originally at $7.25 an hour but it will be set at $9.00 , this was primarily aimed at industrial facilities to adjust their pay scale to that amount.

And this is one of the President’s tax policy ideals that he wanted to push on.

But the downside to this idea (Dam Always The Downside Right) is that most Companies might decide to just cut back on the manpower, due to high cost expenses that they will face for raising the pay grade scale.

(Me Myself Feel That These Companies Can Spare A Little Extra Change But The Higher Ups Like Money Hungry Greedy CEO’s Tell Them H**l No Cut Extra Workers).

Then you have to think well what about a rating system to really analysis what is what..

So let’s look at the 90’s, a time when minimal wage was half of what it is now, a starting wage then was at $4.25 which at some companies or restaurants might go up to a .75 cent increase putting it over $5.00.

This would them involve methodologies of economic (Wage Increase) payout to employees of a company(s), should not matter in terms of hiring the same amount of workers which means it should not cone down to slicing workers from their jobs.

But later studies by analysis say different in this time 20 years later, that a minimal wage hike would have negative effects on the economy, LOL and the only reason I myself can see that for is the mishandling of Company funds on the part of CEO’s and usually management.

I mean come on like Banks’ handling our money nowadays look at the crooked-ness that plays into all of this bulls**t LOL, but yet they tell their workers… Oh No no, the Company is not at the projected annual amount, therefore we cannot issue you guys a raise in pay due to the Company’s financial standing… Oh please…