This is some crazy s**t, but here we go.. Last night at  JJ’s restaurant out in Kansas City, Mo. Fifteen people were injured in an explosion that happened at the popular food franchise. Mayor Sly James had spoken about a body that was found in the rubble after the explosion. Fire fighters had come upon the body in the rubble, and the other people there was taken to the hospital.

The cause of the explosion was believed to be that of the underground pipelines that run underneath the establishment, Kevin Gunn a PSC Chairman said that the pipelines were marked which is procedure and enforced by safety laws. Missouri Gas Energy  provide services for the restaurant.

Gunn said.. “Preliminary indications are that a pipe was hit and that’s what caused a leak. From a safety standpoint, that’ an important distinction to make, because the pipeline does not appear to have failed on its own Gunn said in a meeting Wednesday.

Basically pipelines are to be inspected, and reported if there is any breach of the line to make arrangements for maintenance. maintenance of pipelines include, checking cathodic protection levels for the proper range, surveillance for construction, erosion, or leaks by foot, land vehicles, boat, or air, and running cleaning pigs, when there is anything carried in the pipeline that is corrosive. 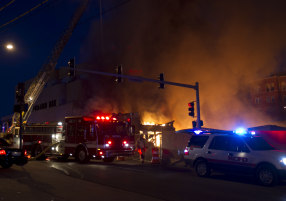 That is stated in the U.S. pipeline maintenance rules which is found in the (CFR) Code of Federal Regulations section.

And the other requirement of the employees is to use gas detectors, as they enter into the restaurant and alert other employees and the supervisor / manager of any detection.

“At this point, our investigation is going to be finding out what happened,” said Bob Leonberger who is a manager of PSC’s pipeline safety dept.

Six of the fifteen people were hospitalized, and nine were released. Three were reported critically injured from the explosion that happened around 6 o’clock Tuesday night.

Kansas City Fire Chief Paul Berardi said that a man was reported missing, was later found at St. Luke’s Hospital for treatment. And another person that went missing was a female employee at the restaurant is still not found.

Chief Berardi said: “I would have always fear there are fatalities in a scene like this.”

He also said that there were trained dogs were brought in to sniff out any other survivors or casualties trapped in the rubble..

After the search for any others and clues from the rubble of the situation is completed, then the investigation will be to look for what exactly caused the expolsion of the restaurant Chief Berardi said.