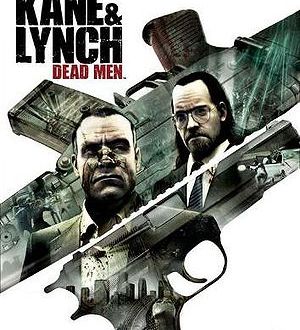 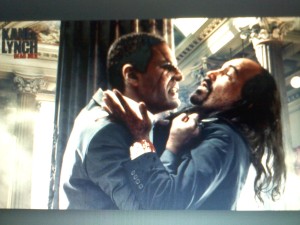 This game is a classic in itself, a real “McCoy” of “McCoys” really. But this game is of political ties to the mob and inside con men, bring the usual murder and death if you cross the top man type of action pack series in a third-person shooter.

The story revolves hugely around one of the two main characters in it. Meet Kane… This is a guy who from the looks of things is down on his luck, and is blamed for a double-crossed labeling him a thief.

But before he can even begin to clear his name, LOL first he will have to get out of the “Correctional Vehicle” as he is being hauled off to prison for the crime of manslaughter.

As he rides on the bus to his final destination, something happens unexpectedly.. This other guy named Lynch, passes the word that there will be a break-out attempt. Shortly after their vehicle is headed straight on for a collision which on course will provide for a perfect chance to flee their situation.

That’s where a group of mercenaries confronts the two, taking them to a construction site, where they are talked to by the members of a gang of hardened criminals called “the 7”.

The group is led by “The Brothers” , and two henchmen Mute And Kane’s friend Carlos.

Things get a little hairy right off, because of the party being crashed during the meeting of “The 7”.

The Police find out their hide out of operations, and both Kane and Lynch must shoot it out in order to get away . 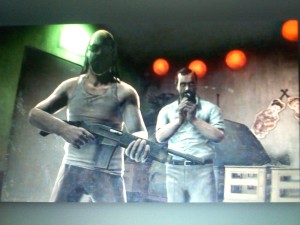 But before they do they converse about what the 7 had discussed with mainly Kane about stolen currency that he owes them, and they threaten him in the worst way by telling him that they have his wife & daughter in their grasps.

So basically Kane has to find a way to pay-off these guys or his family is toast, and to make things even more dramatic LOL.. They assign Lynch as his watch dog to keep him on the straight and narrow to the plan.

But there is yet another twist  to this shaky infer-structure of a fragile plot, Kane didn’t even steal the money LOL.. And after telling that to the 7 before the meeting was broken up, they still insisted that he go after whomever has their cash.

So they are twisting his arm into a tangled pretzel haha, and I mean the non-salted type 😦

So Kane gets this grand scheme, to simply go rob a bank, and he invokes the help of a  specialists that has rob banks before.

Now keep in mind that Lynch gets caught up into what you would call “Hallucinations Episodes”, that is when he just goes out of his mind thinking that everybody is trying to get the jump on him or something. And the s**t is funny REALLY FUNNY..

This is the comic relief part of the game as you play through it as well, and Lynch might even turn to uncontrollable violence to combat what he feels is unlawful intrusion of his personal space haha.. Seriously he just goes “Ape S**t” infinity without stopping for any intermissions..

And that happens right when they were robbing the bank, and Kane had left Lynch to watch the everybody else in the bank while he and his friend go through the process of cracking the safe and nabbing the money.

The cops once again show up to the fiasco, and now Kane and Lynch have to fight their way out of the bank because of Lynch’s blundering of the 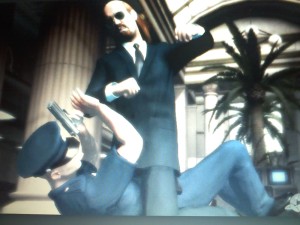 Another guy I guess that Kane’s friend (The Bank Robbing Specialists), have a get-away guy

drive a van backwards into the bank and they pile in for a desparate escape.

After Kane relizes that he only has a portion of the money that is needed, he convinces Lynch to go to Tokyo with him to grab more needed revenue.

Why in the hell did he do that for, LOL asking Lynch to go with… After the bank freak-out session?

So the two go to Tokyo, and yes Kane comes up with yet another hair-ball plan.

This time he plans to go after a powerful Japanese crime lord named Retomoto, Kane uses the crime lord’s daughter as a target for the intention of him paying money to get her back.

Until… And yea you guessed it Lynch well… I don’t even have to explain I’ll let the video do the rest of the talking from here haha enjoy..

Till Then: My Motto: Stay calm, cool, collective, knowing that the only thing that keeps you from making a difference in life is yourself strive for the best! 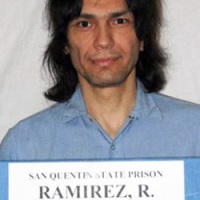