McDonald’s was a kid’s dream to play and ate for over the last handful of decades, and the business has went from there continuing to put smiles on kid’s faces through the iconic clown character Ronald McDonald.

(don’t even think about going to Mickey D’s with 15 cents, asking for a burger because they will laugh at you. Heavily). 😀

But as time went on “The Happy Go-Lucky Clown”, is not in the picture that much anymore. But even so, the franchise itself is still going pretty strong despite the fact of consequences the fast-food industry has been facing with the whole “health food” situations.

But there seems to be another thing that the famed fast-food giant is facing as of now today, what could that be right?

Well it’s like most people in this country that have an apartment, or a house that they pay a mortgage on, gotta throw in the utilites right wouldn’t be fair to leave them out of this topic.

Believe it or not (like Jack Ripley would say), this is about the rent that has franchise owners not happy. At all..

So it comes down to this the franchise owners are taking the steps to address this issue to corporate McDonald’s itself, in an attempt to waive the high costs of a matters which are the following…

One franchise had just came out and said that the franchise is not making the money that it once did..

And that maybe the case right there, most of these companies, corporations, etc.. etc.. Are downsizing. Let’s face it, money in the economy is just so tight now, that this will even have Uncle Sam reaching for his “star-spangled”  top hat taking it off and brushing away a tear from his eye with his sleeve.

Because lack of money doesn’t just affect the few, it eventually will affect the masses in a given assortment of time.

That includes businesses, franchises, corporations, h**l I don’t even see to many people taking their family out on a Sunday 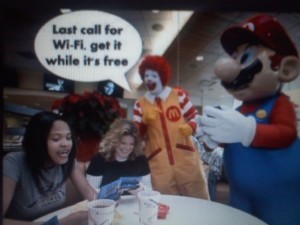 morning that much at all anymore to Bob Evans for breakfast sausage patties, and pancakes.

LOL everything is just too expensive.

So just imagine keeping up the rent for a fast-food joint today, mind-blowing I can only say to that statement.

Just like in Demolition Man remember McDonald’s other fast-food establishments didn’t survive the franchise wars, so maybe Lalena Huxley was right so far, that it may just be Taco Bell that might still be around after another 30 years.

But so far franchises owners have been holding hush-hush meetings to try to find an angle, to curve around the high cost of rent and trying to talk the company down on the high costs.

They’re aiming at the original cost-rate to be put back to 8.5%, because right now they are almost paying double now.

And this is just a testament to the fact about anybody who is trying to open and start up a major restaurant franchise, like they would say in the gangster movies that famous line.. “Forgeta Bout It!” The money that would go into it, would be f**king insane.

But as for now this is a set-back for McDonald’s, and can they get the company itself to go along with coming down on the rent? Well LOL.. I guess they’ll just have to cross those fingers, and hope for the best. Haha.