Bring Back That Stunning Feeling Before It’s Gone.. 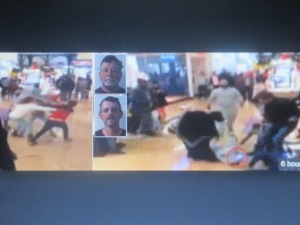 Now if that catch phrase didn’t ring a bell, that was part of a song but you have to ex-out the part that says “Stunning Feeling” LOL.

So some issues went down on Black Friday as many would suspect, and the usual reason why would be because of the crazy shopping deals that can make people turn into literal monsters without them even realizing exactly why.

Such a case with two couples that got into a serious situation, so one would guess right off that it has to be over a toy or some item that they probably had claimed first.

And that can happen when you find that Christmas gift item that you have been searching for like crazy, only to have someone come up to that same exact item reaching for it as you are thinking about it as well.

What usually happens then is that you have a stale-mate over who was there first to claim the item, and that’s where it can turn really quick.

But this wasn’t the case..

In fact, it was one of those situations that just got out of hand.

Apparently the guys of either of the couples had got into it, and the situation turned into a melee match between the two.

Just a few seconds after, the girls of the couple groups then jump at each other as well.

All the while this is going on, one of the couples had a kid in a stroller.

At a point into the chaotic confrontation, one of the girls of the couple groups decides to pull out a stun gun.

An eyewitness saw the action unfold in front of their eyes, as they told the story.

That’s when a few people out of the crowd in the store jumped in to separate the girls, and then moments later mall security came out to cease the fueled fight all together.

There was even an earlier situation between another two girls that went viral, taking place in the shopping center store as well.

At another mall that was even a conflict between two guys that was fighting over a television, that ended by a guy getting pepper sprayed by the police.

And yea you know that someone would pull out a handgun at this one store, which winded-up with that person getting stabbed in the arm that pulled the gun LOL.

These people are f**king nuts if you ask me.

Fighting over stupid s**t like televisions, and toy items, and whatever else..

I’m not even to sure if these stores show generosity you know like setting out free hot coffee (Sanka Brand), and it comes down to the last cup all the while two shoppers want that last cup, and they argue over it.

And then one of them pills out a holstered Shotgun, from inside a long coat…

Even though one of the store employees was going to set out another pot in 15 minutes tops haha.

That wouldn’t surprise me LOL. Seriously.

That’s why holidays to me now is just messed-up you have to admit yourself, people completely lost the meaning of “Happy Holidays” BIG TIME.

Can you just imagine the crazy stuff you are going to hear about on New Years‘, it’s not that far away you know LOL..

Women Shoppers Go At It: A Non-WWE Stun Gun Match!!