They Just Keeping Missing By Inches It Seems

Asteroids what do you know about them, for the most part they fly through space to a destination point then they impact against something and wreak serious havoc. That about sums them up in a nutshell, but I did mention them before in a post a while back.

The thing about them now is that they are flying from various directions, and it has catch the attention of scientist and space observers alike. Lately the news has been monitoring them, and has people on edge as they think where will the next one come from and will it hit here…

Yea it does put a strike of fear into the “ticker” (the heart), I saw the video when the one asteroid hit in Russia.

I gotta say it wasn’t something for the faint at heart that for sure, and more and more have been coming as of late. 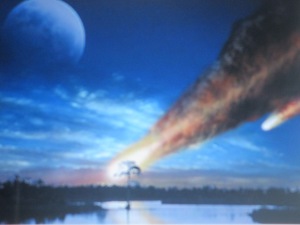 The first thing that comes to my mind is the asteroid belt that is between Mars and Jupiter, and many haven’t heard about this but I remember hearing one time it used to be a planet in between those two planets.

Not sure about the story I will have to check it out to find out more, but the story goes that the planets had collapsed maybe under the pressure of gravity who knows like I said I just remember hearing about it but it was never confirmed.

But with the help of the internet today, I can really search it out and find out the truth! Dam you gotta love the net where was it 25 years ago LOL.

Ok I did a fast check there was a supposed planet called “V” that was around a lot of years ago (billions from what I just read), the thing is about V it was one of those types of planets that had a awkward orbit that carried it wildly around the Sun. 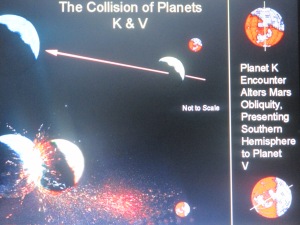 Pluto would be the other one, because it’s orbit crosses inside of Neptune’s then back out to a further point while it travels around the Sun so go figure.

But planet V from what it was called, would travel through the asteroid belt and push through it with would cause asteroids in return to be launched outward into space.

Then on top of that planet V would intrude into other planet’s orbits (crossing in and out of the orbit of other worlds), while at the same time whizzing asteroids along with it. Yea that sounds like a good time waiting to happen you think? LOL.

Doing this planet V would spin and toss asteroids that gets dragged along in it’s orbit, and in some cases the asteroids would increase in size and mass.

But it was said that eventually planet V would become a victim to it’s own madness due to it’s changing orbit patterns finally smashing into the Sun as a result, so if that’s the case that’s why we never have seen it because it took itself out eons ago.

The Moon is another story because suppose it was a part of a another world that got hammered as well, and as a result the Moon broke apart from it as a leftover circular structure that found it’s way into Earth’s orbit. Nice…

But as fro the asteroids I was reading about satellite telescopes like in that one movie called “Gravity”, that are monitoring areas in space to track down others that might by hurling our way.

If we can detect them early in case if aby are heading directly for us, then steps can be taken to act to destroy them on our end I guess with a group of rockets or something of that nature to take them out or divert their course away from the planet.

All this space talk is pretty cool, alright check out more below this line see you next time.